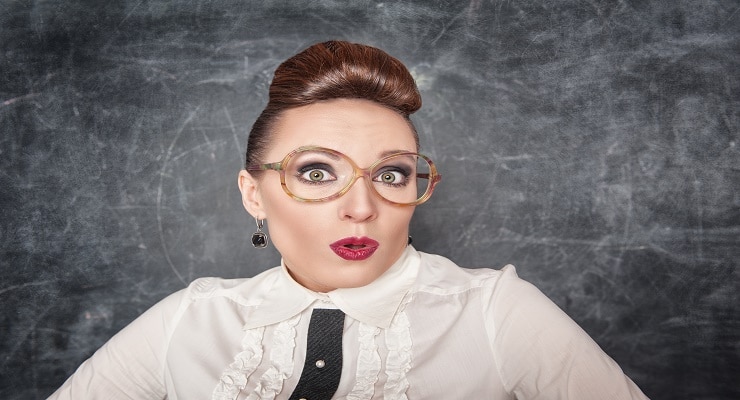 There are a whole bunch of myths and opinions floating around the Internet about Common Core State Standards The recent public backing of CCSS by a coalition of active duty and retired military spouses has brought this issue into the limelight again (if it ever really left).

So, let’s talk about what Common Core is and what it is not. 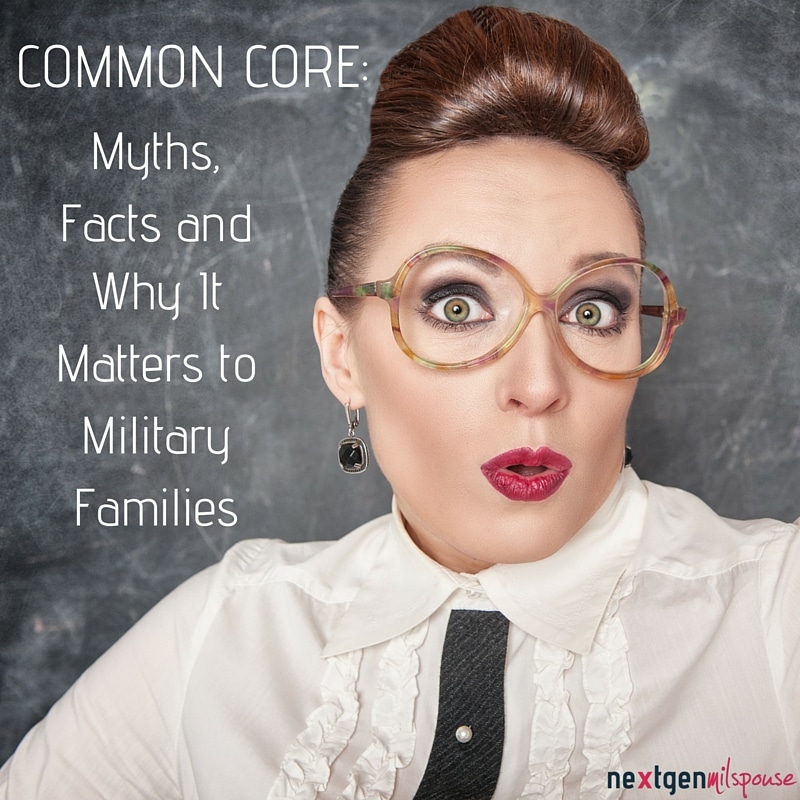 You may have heard – Common Core is prescriptive, not descriptive.

Yes, Common Core standards DO tell teachers what students at each grade level should know and be able to do. So do the state-created standards in use before No Child Left Behind was put into place under President George W. Bush. So, logically in all cases, the materials placed in classrooms will be formulated to adhere to the standards.

Here is where the rub is though: the things created for use in classrooms are often not quite aligned because the materials are old. Or the materials are simply not there yet or not expansive enough or were created (relatively) quickly or implemented with little teacher training but high expectations. So teachers need to get creative and create or buy supplemental teaching tools.

Often, the standards (and accompanying teaching materials) seem prescriptive because of the accountability demanded by the state and federal government through No Child Left Behind, Race to the Top, and now the Every Student Succeeds Act signed by President Barack Obama. Schools, and therefore teachers, have to show student growth with tons of data points and analysis. Which means that they are required to use specific materials, tests and teaching strategies by their schools or districts.

Keep in mind CCSS is a relatively new education initiative. It was first discussed in 2006/2007, and first ratified by states in 2012. Schools are still ironing out some wrinkles.

You may have heard – Common Core dumbs down our education.

No Child Left Behind (NCLB) required all states and all schools to bring all students (including students who were learning English as a second language AND students receiving special education services) up to the proficient level by 2013/2014. This was done without creating a uniform bench-marking system or test. And so results are all over the map and no state is even close to achieving 100 percent proficiency for 100 percent of the students.

Common Core was created to address this exact situation: create a set of national goals and objectives that ensured that every member state required approximately the same things of their students at the same ages.

In some situations, the leap between the state-created standards and CCSS was huge! Students would be required to do much more. In other states, the standards didn’t change much.

Remember that CCSS is NOT required federally and states are able to adapt or modify the standards based on their needs. Or not join at all, in many cases.

You may have heard – Common Core is the liberal agenda hard at work.

Former Arizona Gov. Janet Napolitano, a Democrat, did write an initiative in 2006/2007 during her time as chair of the National Governors Association that focused on improving education standards in math and science.

From this, Napolitano did help to create a nonpartisan education task force that commissioned a study which generated a report on the state of education in America. This report helped to provide the first steps toward Common Core.

So, liberal? Not entirely.

Actually, the GOP, including most of the long list of 2016 GOP candidates supported Common Core when it was first rolled out.

Chris Christie loved it in 2013. So did Bobby Jindal and Mike Huckabee. Until the Tea Party made it a point of contention. With the Tea Party and similar conservative groups influencing the conservative dialogue, many GOP politicians feel that backing off of their support of CCSS is beneficial.

Conservatives are not the only ones who are moving away from support of CCSS. Diane Ravitch, the former Department of Education official under George H. W. Bush, and Sandra Stotsky, a former deputy commissioner of education in very liberal Massachusetts, have both been vocal in their disavowal of CCSS.

You may have heard – Our kids will be forced to learn graphic sex education.

I’m a teacher, so I’ve read the standards. And I invite you to read them as well. The official CCSS cover math and English language arts (ELA). That’s it. Not science, not sexual education, not PE. Under the umbrella of ELA, yes, they do cover history.

So, I am here to OFFICIALLY tell you that sexual education, graphic or otherwise, is NOT required to be taught by the Common Core.

In the Next Generation Science Standards, similar in concept to CCSS but for science, students are expected to learn about: basic biology including plant parts and reproduction; inheritance of genetic traits; evolution (because it is a generally accepted scientific concept); cells; and microorganisms. Having read these standards as well, I also couldn’t find graphic sex ed mentioned as a requirement.

However, every state DOES create standards for every subject, including health and sexual education. As a sample, these are the 2015 Virginia state standards for health education. In sixth grade, students will study the basic urinary system and discuss renal health. In high school, they also study the endocrine system which might lead to a discussion of hormones. Throughout these standards, the emphasis is placed in creating healthy habits, like personal hygiene and avoiding risky behaviors, like drug use or gang activities.

Might unprotected sex come up? Maybe, but it is also not explicitly included in the standards, in a graphic manner or otherwise.

Bottom line: people who claim that CCSS or any standards, are forcing your child to learn graphic sex ed topics at any point in their K-12 education career is probably not knowledgeable in those standards.

You may have heard – Common Core is run by the Gates Foundation and Pearson.

This one holds some water. The Bill & Melinda Gates Foundation and Pearson did team up to create online courses for use in classrooms and schools that adhere to CCSS.

Pearson is the parent company of many education publishing groups. Since it has retooled its textbooks across publishers, grades and states to meet CCSS standards, it is in Pearson’s financial best interest that this education reform succeed.

You may have heard – Common Core hurts military families more than it helps.

This has been the case since the first public school opened its doors.

Common Core, whatever you think about it, does not hurt #military families.

Before, students were showing up for work or college lacking basic skills and knowledge because the standards in their state were terrifyingly low.

Now, in states that have adopted CCSS, all students are held to the same standards. And the standards were created by a board of teachers and experts in each field (again: math and ELA only).

Why would that help military children? It’s pretty simple. We move a lot. If all the states you move to are following CCSS, then all students are being held to the same standards, all of the time. While, yes, there might occasionally be some organizational differences in the order that things are taught, generally your child will not miss out on anything.

That’s right. No more moving from A to B, and being hit in the face with shockingly high or low expectations, or your child being asked to do work that your previous school wasn’t expecting for two more grades.

Let’s review the facts about Common Core: no graphic sex ed, not a liberal agenda, not federally mandated and no dumbing down of education. Yes, it is supported by the Gates Foundation and education publishers.

So, why all the backlash?

As a teacher, I can sum it up in a few words: confusing homework.

Why all the backlash over #CommonCore? The confusing homework.

This is where CCSS has been a letdown to parents AND teachers. As these new standards and accompanying textbooks were rolled out, the training and education in how to teach them was spotty. And if the teachers don’t always understand what is happening, especially in math, chances are that parents won’t understand either.

Having used material that is CCSS aligned, I can tell you that it is confusing unless you have been trained.

Luckily, there are resources out there to help parents. One awesome education tool is Khan Academy. It has videos, teaching modules and operates like a game. If you have questions, check it out!

Another great idea is to contact your teacher or school administrators to discuss creating a way to teach parents about the new teaching methods, especially in math.

Is Common Core perfect? No. Is it a deal better than the hodgepodge of education standards we had before? In many cases, yes.

Loyalty to a Ho-Bowe
“I Love Being Able To Shed Light On The K-12...
The One Thing I Will Not Skimp Or Try To Save Mone...
How to Shift from Panic Mode to Prepare Mode

When You’re Saying Goodbye to Your Favorite Military Base

Motrin And Waiting Doesn’t Work For Our EFMP Families 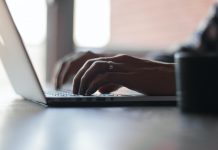 Give Your Dreams the Time They Deserve

The Identity of Me

Eating My Placenta Saved Me from Postpartum Depression

8 Reasons Why Military Spouses Need to Chill Out