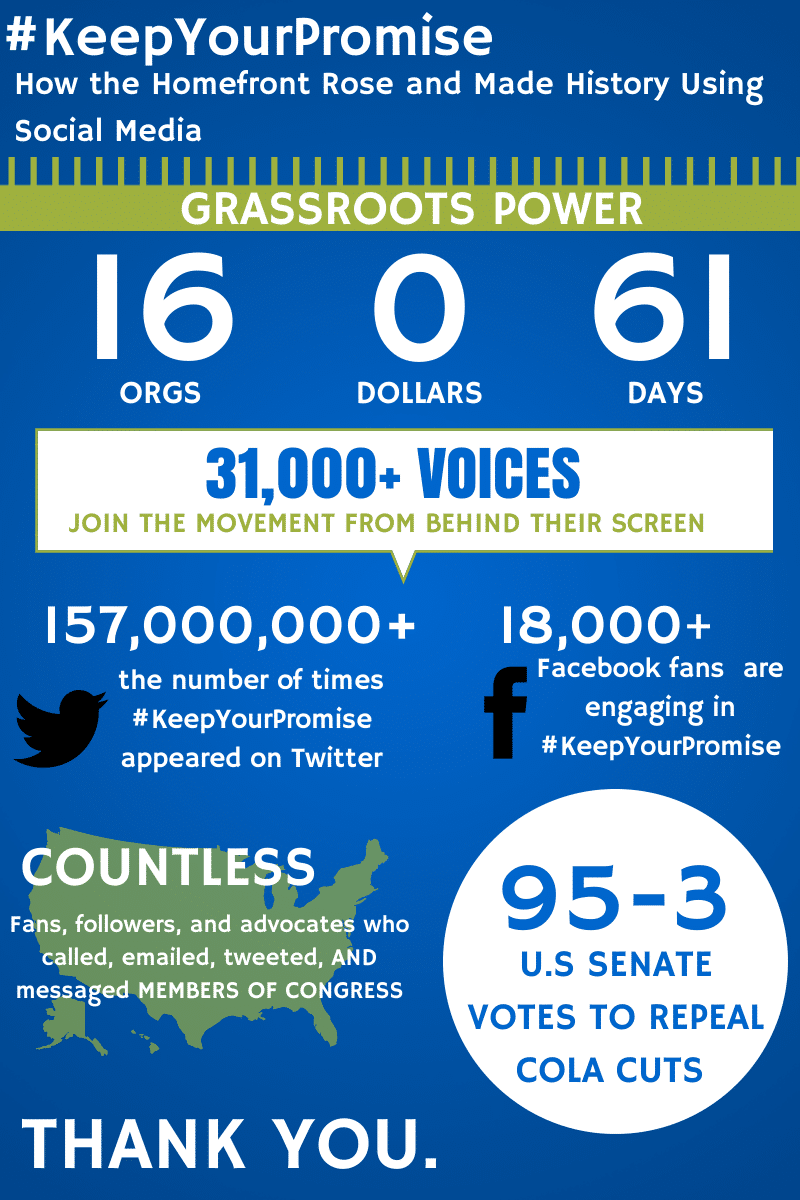 #KeepYourPromise, a grassroots movement started by military spouses, that reached more than 25 million people since it was created in December 2013, announced today that they’re not taking their recent repeal of the military retirement COLA (cost of living adjustment) cut as a reason to rest. Instead the alliance is setting its sights on the President’s Budget, scheduled to be released March 6th.

“Are we appreciative that Congress passed and President Obama signed the repeal of the COLA cut last week? Of course…” said Jeremy Hilton, a #KeepYourPromise co-founder. “…but we knew the COLA cut was the first shot across the bow. We’re anticipating the President’s budget to contain additional cuts that will negatively impact military families. Our intention is to continue giving our families a voice via #KeepYourPromise.”

The COLA cut was part of the Bipartisan Budget Act of 2013, which was passed without input from the Department of Defense or either the House or Senate Armed Services Committees. The change in law would have cut the value of a typical retiree’s retirement by tens of thousands of dollars; a burden to be endured by many of the same service members who spent the past 12 years fighting overseas.

“How could they cut this earned compensation without even talking to members of the military community?” asked Jennifer Pilcher, a #KeepYourPromise co-founder. “After multiple years of war, increased deployments, suicides, and injuries, #KeepYourPromise isn’t too much to ask of our elected leaders.”

The #KeepYourPromise movement is 100% volunteer-driven and is funded solely with the passion, late nights and expertise of our diverse military families.

“Many of us work other jobs and are raising a family,” said co-founder Lori Volkman. “And since we’re military families…many of us are doing all of that with deployed spouses. But this issue… telling Congress and the President to #KeepYourPromise is worth every bit of our efforts.”

The #KeepYourPromise Alliance was created in December 2013 by a handful of military spouses angered over an out-of-touch Congress that voted to reduce the value of military retirements by tens of thousands of dollars. They teamed up with 16 military family organizations to start a social media campaign that reached millions. In February 2014, the alliance celebrated its first victory when the cut to retirement benefits was repealed. 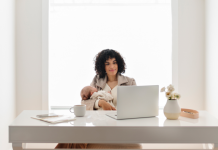 6 Financial Blogs Every Millennial Should Invest Time in Reading

5 Ways to Ditch the Drama in Your Life

AMPLIFY 2016 Is a Game Changer for Military Spouse Employment

How to Tell the Story of Your Travels by Incorporating Local...

How to Be Financially Stronger This Year

“The Worst Career Advice I Have Ever Received Was To Give...

5 Reasons Why I Participate in On-Post Events

How to Turn Your Temporary House Into a Future Investment